New Istanbul Dream and Center of the World

Screening of the films Istanbul Dream and Center of the World

Kamen Stoyanov has been artist in residence by the Federal Chancellery of Austria in Istanbul in 2016.  He started to work on an experimental movie that deals with the construction of the third airport in Istanbul using different layers to expose the difference between the realities of the villagers in the area and the narrative of the state power. “New Istanbul Dream” consists of documentary shots showing the changing of the environment through the construction works. A performative layer based on the traditional Karagöz shadow-play structures the movie. This layer opens a space of an imaginary and activist movement. Different sound layers and music performances produce a journey for the audience participating in the flow of the art-work. New Istanbul Dream is a trip into a controversial topic and area universalized by a stunning innovative Video-Art-language.

„The movement as a process plays an important role in my practice. Social, urban, cultural or institutional ones. The movement is an instrument of shaping the space. My actions happen on the streets or fields or in the art spaces. They are often reactions and comments on political and social processes or interactions with the environment. … My work could be seen as hybridizations of the art language and the bright cultural practices from the so called „outside“ of the art field.“ (Kamen Stoyanov) 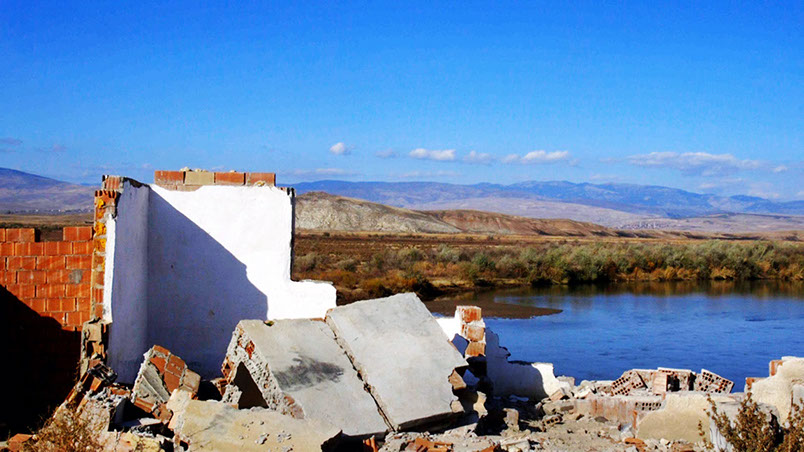 According to a survey from 2003 and confirmed by a Google Maps entry in 2016, the center of the Earth is placed close to the Anatolian city Corum in Turkey. The coordinates provided are: 42´´ 52´ N 34´´ 34´ E.  Artist Katharina Swoboda went onto a journey to Çorum, an Anatolian Town at the Black Sea considered as provincial and periphery even in Turkey. The Video-Art-Works turns into a personal and poetic exploration and questioning of the terms center and periphery actually means.

“I enter these coordinates in one of my navigation devices and follow its direction to the center of the world. I arrive and I am happy to be at the center. But something seems odd. I decide to double check and I enter the coordinates again into a second navigation device. It says I am not in the correct location. So the journey goes on. I get into my car again.” (Katharina Swoboda)

Both Videos are part of the traveling exhibition, ‘The frame that blinds us’. This is a constantly developing exhibition project that will be presented in 2017 and 2018 in Budapest, Plowdiw, Graz and other places. The project also consists of a film program, performances and a publication and is curated by Katharina Swoboda and Mare van Koningsfeld. They refer to a frame introduced by Judith Butler. In ‘Frames of War’, Butler discusses what determines a life as recognizable and valuable post 9/11. She questions why some human lives are worthy of protection, while others (that are Non-Western) are not, in time of war as well as in a daily context. Butler believes that different forms of media are crucial players in modern times: imagery that is spread through modern technology like Internet and television confirms political, media and other kind of ways Non-Western migrants are framed. But the same techniques can also oppose traditional ways of framing and create new ways of perception. In this exhibition project ‘The frame that blinds us‘, several artists reflect on this theory and the current refugee crisis that became urgent from 2015 onward.

Talk with the artists and Cocktail