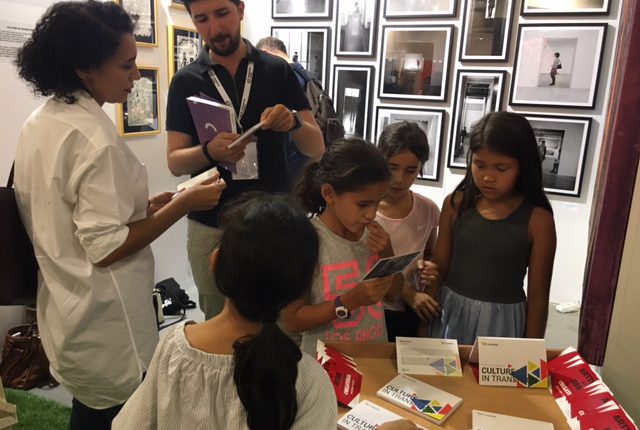 Three artists from different backgrounds, different places and different disciplines will present their artwork in the frame of the Mahalla festival at the art fair Contemporary Istanbul 2017. All three have met and worked together since 2014, in Istanbul, at the art cooperative Arthere. As a result of the Syrian war, two of the artists were forced to flee to Turkey. Neither one of them knew of each other before and they hadn’t realized that a war would have brought them together in a new phase of exploration. They were filled with many mixed feelings, having come from a troubled geopolitical atmosphere to Turkey from it’s neighbor, Syria. They have shared together, good days, bad days and they share worries about future. The works shown might or might not reflect these feelings and how they have been affected by migration, war, hope and life.

Omar Berakdar is a fine art photographer from Damascus, he moved to Istanbul at the end of 2012 and one year later he co – founded Hamisch, a Syrian Cultural House in Istanbul. Following this, Berakdar, continuing to focus on art and culture, founded Arthere Art Center. in Kadikoy and later was joined by Gulsun Oyku Dogan and Ali Omar.

Ali Omar is a painter and graduate from The Fine Arts Faculty of the University of Damascus. His main focus at the time is painting and mostly portraiture. He had to flee Syria to Erbil (Kurdistan) in 2012 to avoid being conscripted in the Syrian army. Omar then went back to his village in Syria where he then found himself outside the control of the Syrian regime. After a period of time he had to flee again, to Istanbul this time, at the end of 2014.

Gülsün Öykü Dogan is borned in Izmir, grew up and lived in Ankara. She studied economy and finally decided to focus on art. Her illustrations mainly express feelings of her own narrative as a woman living in Turkey.

Arthereistanbul is an Istanbul-based art centre / non-profit structure founded in 2014 aiming to empower Syrian artists and create conditions where they can find support, hope for the future, guidance and a means for them to find their place in the world around them.

Arthere’s ethic is to emphasise tolerance and understanding and welcomes artists whether they’re from Syria, Turkey or anywhere else in the world.

The aim is to provide a space with an international presence. Arthereistanbul collaborates with the Resartis Network for art residencies, which welcomes artists from all over the world, and is a partner with the Roberto Cimetta fund’s “Fil Manfa” program for hosting Syrian artists.

Tags:
Share this Story
Related Posts
The Earth is looking itself through me
Longing For Safe Spaces
The Wandering Tower – Virtual Exhibition