I SPLIT MYSELF TO BE EQUAL and THE LOOSE POWER

An application form must be filled in per person. For safety reasons, a valid photo ID (ID) is required at the entrance. Please register online.-

Two artists are showing sculptural art works in the space of the Consulate General of Austria in Yeniköy. The Austrian Residency in Yeniköy was a gift of Sultan Abdülhamid II. (1842-1918) in the late 19th Century in respect to the coalition with the German and Austrian-Hungarian Empire in the first World War. The military defeat of this Coalition leaded to the collapse of the three Empires. As a result of the Second World War thousands of European found shelter in the 1923 founded Turkish Republic. Today the New World Order of a globalized world mainly ruled by economical ties and political diplomacy is shaken by a wave of forced migration resolving from wars, draughts and poverty in the Middle- and Far East and in Africa. The world is facing the biggest refugee crisis since World War II.

Austrian artist Sherine Anis is the daughter of Egyptian parents settling to Austria in the 1980th when she was an infant. Her work shows the ongoing process of the search of balance in a trembling world. The internal psychological process is transformed to a fine artistic abstract comment on the current global crisis.

I split myself to be equal is a collection of sculptures installed in the interior of the Austrian Residency. The rough look of eight Ceramics designed in different hand gestures wiggling on high-tech-designed bases out of plastic and some Iron Sticks used to strengthen Walls on Construction sides usually create a humorous contrast to the empire-atmosphere in the entrance Hall of the residency. Hands are parts of a global iconography regarding the representation of regulations: Stop Signs and Go-Signs are often represented by Hand-gestures. The movement of the Hands is in the contrary an important part of underlining individual grace in lots of forms of dancing. Children are exploring the world by grabbing things with their hands. “Burning the fingers” serves as an Idiom for the punishment of individual actions violating the common doctrine. Anis is using an mélange of different layers with fine connotations, or as she expresses herself: “I have the feeling I am stuck in the middle and the global issues are my issues. Therefore my motivation or cue is to show these differences we all share.”…“There is a distinction between religion and belief for example. These days’ talking about religion is like touching a hot pot. No need to burn your hands on this topic, which is splitting the cultures at the moment. None teaches the equality in the difference.”

Artist İbrahim Koç was born in Mersin to a family of former Nomads (Yörük). As a youngster he learned the craft of a metal smith in the Forge of his elder brother before he studied Fine Arts and graduated from the Mimar Sinan Academy in İstanbul. Currently he is working on a film comparing the lifestyle of Turkish Yörük with the Aborigines in Australia, where he lived and worked for two years. 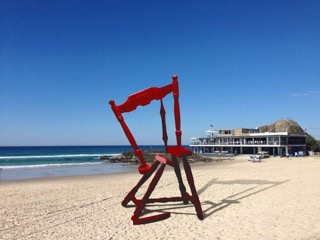 “The Loose Power” is a massive three meters sculpture made out of wood. The chair in bright red color is dismissing its function though. It seems to be broken as the result of an unknown intervention on the first sight. On the second it is revealing a sublime commentary on the changing power structures during the past hundred years regarding the space of the installation. Koç is showing this One-Object-Installation artwork at the mahalla Festival and parallel at the Swell Sculpture Festival at the Pacific shores of Gold Coast, Australia, a classical immigrant country historically being approached from the seaside. İbrahim Koç’ installation is a sublime commentary on the changing history rebirthing certain conflicts. The shiny surface of the artwork creates a contradiction to the lose stage of the deformed object. It didn’t age or rot. The dysfunctional chair is an object only quoting its usual function. Created as an art object it symbolizes a stage of loose of power. In spite of its uselessness the red chair on green grass carries a certain kind of grace and beauty to the garden of the today’s Consulate General of Austria. Or as artist İbrahim Koç brings it to the point: “The chair itself is matching to the main idea of the Festival mahalla. A shiny red seating hardly stands on its feet. Still it is saying welcome to all visitors.”

Tags:
Share this Story
Related Posts
The Earth is looking itself through me
Longing For Safe Spaces
The Wandering Tower – Virtual Exhibition