The Memory of the Bird 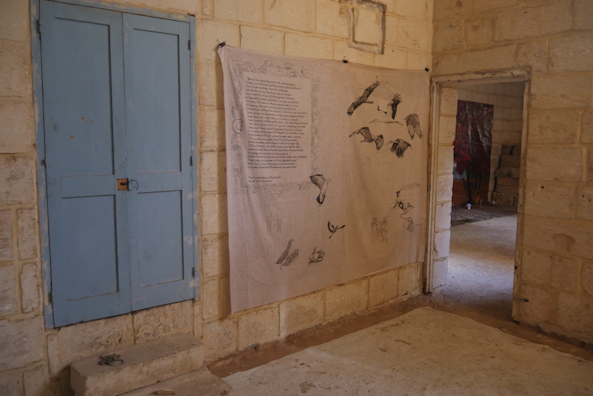 Videographer Mohamed Ibrahim filmed a narration of Eda Gecikmez Installation “The Memory of the Bird” by Sabine Küper-Büsch, Organizer and Curator of the Mahalla Festival Malta 2018.

Ibrahim is participant of the Mahalla Video-Workshop. Some of his Films were screened in the National Museum of Art, MUZA, during the event “searching traces” on 21st of November.

In her art-work for the exhibition “Zabbar calling Citta Hompesch” at the Palazzo in Zabbar Eda Gecikmez is quoting “The conference of the birds” by Persian Philosopher and Poet Farid ud-Din Attar (1142-1220). The epic poem is about the search for an ideal spiritual king. 30 Birds have to travel seven valleys and are facing all the darkest sides of human nature as obstacles. Indeed, in Eda Gecikmez reflection the Birds are facing barriers caused by contemporary war zones, urban distortions and ecological destruction. Like in Attars poem the birds get carriers of a narrative repeating itself.

The white cheeked Bulbul is currently displaced from Syria to the East of Turkey. Birdwatchers say that they come from North-Syrian Deir Ez Zor, near the Euphrates River. The artist points out a historical reference: “When I researched about the place, I faced the heavy historical load of the Armenian Genocide. Deir Ez-Zor was one of the places, where Ottoman officials exiled most of the Armenian population. The worst massacres happened there. I found out there used to be a genocide memorial church in Deir EZ-Zor, but ISIS destroyed it during the war.” In the artwork, the current war in Syria is reconnected with repeating massacres and power struggles during history, exiling and killing humans and animals’ side by side.

Ecological destruction is imposing a thread to the planet in a multidimensional way. Regarding a Journey from Syria to Malta birds are facing a big barrier in Istanbul. The Third airport opening in 2019 is a disaster for migratory birds, destroying an important Biotope for nesting and resting. Furthermore, as Birdwatch Malta points out, the archipelago is a big trap for birds as well. Nearly a million are killed every year by hunters.

In the artwork the birds are recalling an ancient truth about the cruelty and weakness of the search for power as it is the leading theme of Attar’s “The conference of the Birds”.  Metaphorically their memory is pointing to a dystopian future-vision of a world without these witnesses.