Carrying the art work from Istanbul to Malta on the plane was part of the concept. The Vintage suitcase had been bought from a flee market in the historical part of Istanbul. When Antonio Cosentino met to speak about his project he had made a quick sketch. He wanted to carry his belongings with him. As a true Istanbulite, who grew up in Şişli and Yeşilköy, the sea is part of his inner eye. And the ships carrying passengers, goods and memories. We agreed on a portable art work carrying the spirit of Istanbul to Malta. 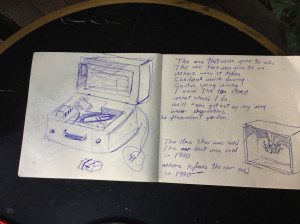 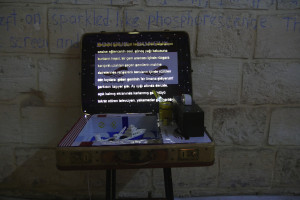 The work was foreseen for the Mahalla Share House at Museum Fortress Builders, but somehow I couldn’t imagine it there. The Palazzo, a building that is a character itself, a stony passenger of time, seemed to be the more fitting Venue for this work. Just in the entrance, left open to show: a portable mind from the city of Istanbul stranded in Malta, a port city as well. The Ottomans failed a few times to conquer the island. The Knights of the order of St. John defended the shores from their fortresses. The last grandmaster, German aristocrat Ferdinand von Hompesch zu Bohlheim, founded the city of Zabbar, where the Palazzo is located. Whoever lived in this place before really had a good taste. We decided to write the English translation of the Turkish text about the texture of a morning at the harbor in Istanbul to the walls in chalk. Like a love letter left to the place, praising the same smells and colors harbor cities in the mediterranean do have.

Antonio Cosentino developed a unique style as an archivist of the metropolis Istanbul juxtaposing spaces with the items he collects and uses for his installations. Disruption and forming different materials, texts and pictures he generates to certain landscapes of meaning. “Tin City” was a genius show the artist made in Küllah, an historical Han that was used as a storage by Italian merchants during Ottoman Empire. Born in Istanbul, Cosentino is the son of a Levantine Italian Father and an Armenian mother. Before studying fine art he learned goldsmith, one of the traditional crafts in Istanbul. Until today he has an affinity to work with metal in his installations. The objects of the futuristic city landscape out of tin were made from Cans collected in Istanbul. http://www.inenart.eu/?s=Tin+City

Later on he formed a cruise ship called “Syrian star” from Cans for the group exhibition “harbor” in Museum Istanbul Modern. Actually the first plan for Mahalla Malta had been to build a ship called “African Star”. The suitcase was the better choice though. The artist’s images have a touch of homelessness and dislocation while breathing a philosophical holistic air opening a new space full of phantasy and utopia.

“Summer was a beautiful day” is the latest artist-book Cosentino published for a Solo show in Zilberman Gallery after a residency in Berlin. It includes a text by the artist called “duvar”, the wall. He imagines a wall that he suddenly recognizes in his city, Istanbul. Influenced by his researches in Berlin Cosentino is fusing items and stories from different sources.  He describes his personal feelings of desperation regarding the ongoing destruction of one of the former most beautiful cities in the world, Istanbul.  He describes that he feels like living in a small bag being pushed by a state backed mafia selling spaces and their meanings. “Why to I feel like crying when I see small children playing with each other? Is it because I connect a kind of empty hope with them? Or is it because somehow everything I value and build up is suddenly looking very different to me. It is like the wish to just cry.”

As a former of the artist group “Hafriyat” (rubble) in 1998 Cosentino is one of a circle of artists that tried to oppose a Gallery and Biennial dominated art scene in Istanbul. The group was running a space for some years that was shared with different artists, performers and other creatives. Although they dissolved Antonio Cosentino still works in this spirit on a Utopia formed bu art works tightly connected to the metaphysics in materials. Pots and pans, Cans, tin and lyrical texts make a day beautiful in this sense.