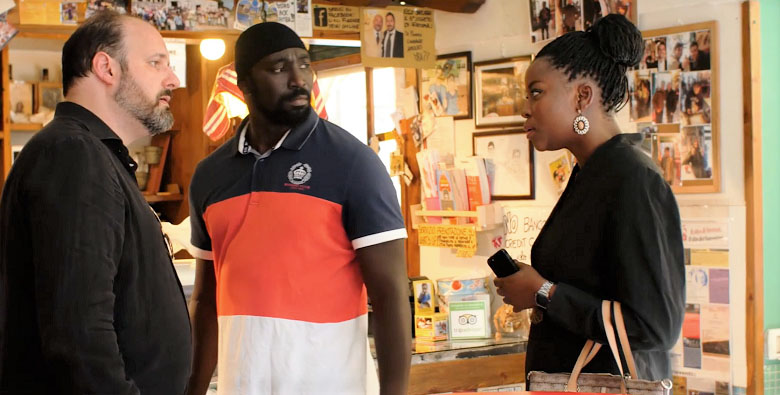 To cope with the COVID-19 pandemic Villa Romana in Florence is sharing an artist’s film online every Wednesday, which has been produced in or around Villa Romana in recent years or was shown here.

The weekly screening is the attempt by Villa Romana to preserve closeness and exchange when the survival motto these days is “social distancing“?

The screening on April 15th was Minister by Fide Dayo.

Watch the movie at vimeo

Villa Romana is a place of contemporary artistic production and global exchange in Florence. The award-winning Villa Romana artists have lived and worked at the facility since 1905. During their stay, they network with international guest artists and the regional and Italian art scene.

Fide Dayo, living in Rome, is a Nigerian filmmaker born into the Ekundayo family in Lagos, Nigeria. After his studies in architecture at the Florentine University he switched to film making.

His film “Minister” is a fictional comedy about the assignment of an African immigrant to the immigration minister in Italy. The film shows the power of a woman who’s aim is to change for hope in social issues: in a moment of prejudice, racial discrimination, the difficulties of integration, the complexity of reconciling professional and policy achievement with the family affection, the violence of power, labor rights and the housing emergency. At the same time, however, the film talks about the African culture, with its fashion, textiles and colors, music, dance and food.

In 2017 the movie was screened at the Mahalla Festival in Istanbul in the frame of parallel events of the 15th Istanbul Biennial.

Check out the current screening program!