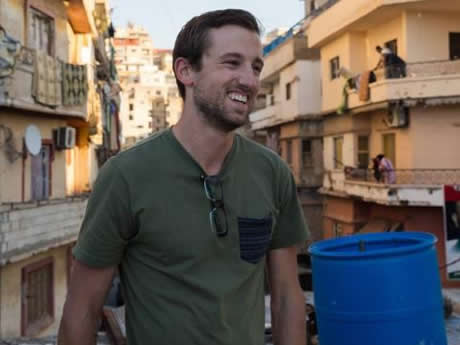 Andrew Cagle
Filmmaker
Andrew Cagle is a Brooklyn based filmmaker and cinematographer.
Before landing in New York, Andrew lived between the US, Middle East, and Africa for several years, most significantly in Lebanon and South Sudan. His credits and clients include VICE on HBO, Virtue, Viceland, Great Big Story, History Channel, and independent feature documentaries. He recently finished his short documentary, "I Am No Bird", which tells the story of Syrian EDM artist Hello Psychaleppo.
Andrew Cagle is available for assignments worldwide with people who want to push boundaries with their storytelling. Additionally, he has a working proficiency in Arabic and is an FAA licensed commercial drone operator.
The Mahalla Fsetival presents his new short movie I Am No Bird, which tells the story of Syrian EDM artist, Hello Psychaleppo.
Hello Psychaleppo aka Samer Saem El Dahr is an electronic musician from Aleppo navigating his new life in America. He launched his music career as a Syrian exile in Beirut, pioneering a genre of electronic dance music he calls “electro-tarab”. Utilizing traditional Arabic musical techniques and samples, it marks the first true original production of Arabic EDM. After immigrating to Minnesota, he takes on his most ambitious album yet, “Toyour". Arabic for “birds”, it explores the theme of borders and freedom of travel. “Toyour” meets the reality of politics when the Trump administration’s travel ban forces Samer, a green card holder, to cancel international shows and puts into question the upcoming release of his album in Beirut.