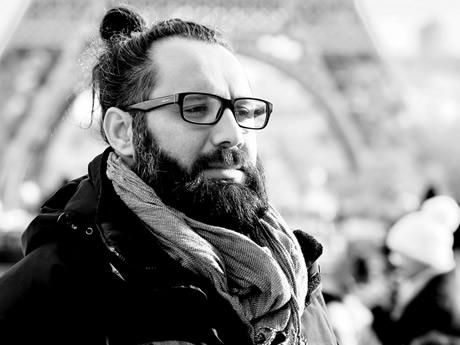 Ala’ Hamameh
Artist
When screaming in the face of tyranny has been rendered futile and any form of expression is prohibited, Ala' Hamameh, an artist haunted by the beauty of the Syrian uprising, turned to art to voice his support of the uprising by “converting the suffering, massacres, conferences and breaking news into lines and colors.”

Ala' Hamameh is a Syrian artist living in Germany who refused to stand on the sidelines while Syrians are sacrificing their lives for freedom and dignity.

During the Mahalla Festival we are showing his movie A Suitcase Memory. For him the “Suitcase” can be a keyword for symbolizing and emulating the situation of people who were forced to leave their country. It is as a witness of the stories of those who screamed for freedom and justice. Of those who escaped being raped or tortured to death in a prison. Of those who could not stand any longer that barrel bombs were dropped on weddings and funerals, on schools and hospitals. A witness of those who dreaded the atrocities committed by regime forces, foreign fighters and fanatic religious maniacs. The “Suitcase” represents the narrator of the whole story. Those who froze to death in refugee camps. Those who walked barefoot through the Balkan forests and drowned in the Mediterranean Sea.