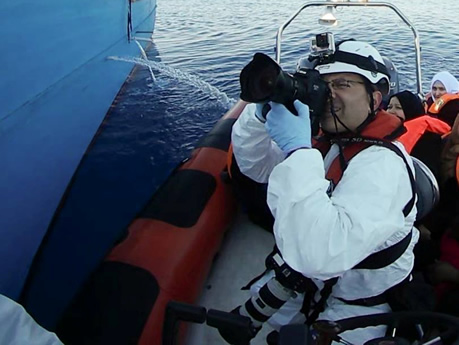 Darrin Zammit Lupi
Photographer
Darrin Zammit Lupi worked at Times of Malta between 1996 and 2016 and has been a contract photographer with global news agency Reuters since 1997. His work over the past two decades has taken him all over the world, during which time he covered the Bosnian war, the Kosovo refugee crisis, the South-East Asia tsunami, the Libyan conflict, development issues in various parts of Africa, and several other international assignments. His work has been widely published in the international press, including TIME, Newsweek, The New York Times, The Sunday Times, The Guardian, Paris Match, and others.

Darrin Zammit Lupi has been documenting the humanitarian disaster for two decades. For the Mahalla Festival he chose some of his strongest and most recent works, many of them exhibited for the first time. His camera sensitively freezes moments of hope, fear, happiness and despair from a respectful distance. There is no posing, all photos have a hyper realistic touch, none is victimizing. The migrants are masterfully portrayed as powerful witnesses of a humanitarian catastrophe in which they are the victims, not the perpetrators.

During the Mahlla Festival at Fortress Builders, Darrin Zammit Lupi displays his photos series Dispatches from the frontline of Fortress Europe.