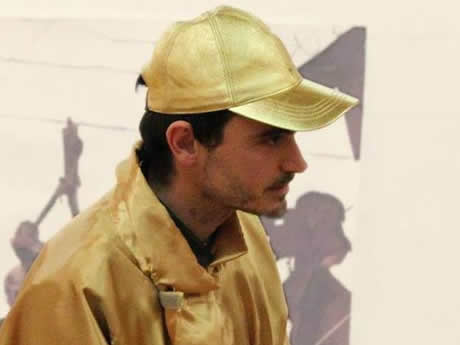 KAMEN STOYANOV
Artist
Kamen Stoyanov - a Bulgarian artist living in Vienna - often deals with the questions of identity, migration, historical definition, social and cultural communication in his works by gathering first-hand experiences of the social, artistic and cultural relations of the given country as a scholarship-holder.
He uses the urban public places and the architectural environment as exhibition spaces, themes of photography and contrasts them with the current or inherited cultural relations, habits.
At the Mahalla Festival Kamen Stoyanov is showing his film Formation of Shadows.
The film Formation of Shadows evolves around the hand shadow theatre “Budrugana Gagra” in Georgia. “Budrugana” means in Georgian “carriage” and “Gagra” is the name of a resort city in Abchasia. After a military conflict in 2008, Abchasia and South Ossetia proclaimed with Russian support independence. Internationally, they have not been recognized.
Budrugana Gagra was invented by actor, film and theatre director Gela Kandelaki. He developed a technique by which the shadow characters were formed only by hands, without other materials. In 2010, the “Budrugana Gagra” group became a recognized state theatre. Later, a school for shadow theatre was established in the village of Upper Nikozi. Upper Nikozi is situated at the demarcation line to South Ossetia. The shadows of the conflict are still palpable in Nikozi.
In Tbilisi, Stoyanov meets Kandelaki for an interview in Rustaveli Theatre, where the workshop of Budrugana Gagra is located. The narration continues with images of the rehearsal, followed by interviews with two performers. One fled from South Ossetia and the another from Abchasia. These interviews engage not only into aesthetic questions of the shadow theatre, but also throw light on its context and content.