Music by Jewish composers from 1000 years ago - nothing less promises us Lucian Plessner with his program. His Israeli colleague Daniel Akiva (* 1953) lives as a guitarist and composer in Haifa and musically focuses on Sephardic Music Traditions. With “Mizmorim” (Hebrew for psalms.) Akiva connects k to the Jewish liturgy, namely to a part in which the Cantor announces the reading of a psalm.Mizmorim. means something like a musical introduction and points in our concert to an example of the oldest surviving Jewish Music: songs of the Sephardi from the Spanish Middle Ages, originally sung in Ladino. The title, “Yo m’enamori d’un aire” means something like, I fell in love with a melody.

Lucian Plessner already worked on Sephardic songs in his time in Cordoba, where they originated around a thousand years ago.

In 1492 the Sephardi were expelled from Spain; also the ancestors from Salamone Rossi were forced to flee. Rossi (around 1570 - around 1630) was a composer at the court of Mantua – during the times of Renaissance a liberal stronghold. I n addition to his duties in Service of Duke Vincenzo I Gonzaga gave Rossi great freedoms granted. Among other things, he reformed synagogue singing and published secular songs. It was even possible for him to sign his works with “Il ebreo”, The Jew., for what he would have ended up in the dungeons in the rest of Europe one would.

Based on his great role model Claudio Monteverdi Rossi published several collections of pieces,. In addition to sonatas and Symphonies they also contain. The three examples of this fast dance from Rossi's third book of various sonatas (Venice 1613) are each composed for three voices (soprano, alto and bass), but do not contain any scoring information; Lucian Plessner transfers them all to the guitar.

Andalusia lost for the Jews - this mood is pattering the next piece by Daniel Akiva, ÉSTA MONTAÑA. In the tonal language it is more modern than .Mizmorim., it is mainly designed to create this atmosphere of loss.

The next Sephardic Song, .”Como la Rosa en la Güerta” ,(literally translated: “You are lik the rose in the vegetable garden”.), sings about a lady of the heart.

Alexandre Tansmans, Cavatina. was created for the doyen of the Spanish classical guitar music in the 20th century, Andres Segovia. Tansman (1897-1986) was born in Lodsz and worked in Paris before Second World War . Two days before the invasion of the the National Socialists he fled to the USA. The “Cavatina” originated 1953, it was composed after Tansman returned to the French capital.

Segovia provided the composer with numerous tips on the specifics of the guitar, which give the piece its special notion.

Leonard Bernstein (1918-1990) came up in the late 1980s with the surprising idea to ask Lucian Plessner, to arrange music from him for the guitar. The world-famous conductor and composer created the “Mass”for the inauguration of the Kennedy Center in Washington D.C. in 1971.

It was designed with a particular ambition. The title leads to the Catholic liturgy, but the composer created a non-confessional arrangement for Theatres including singers and dancers. He is asking the central question: How can it bethat the western world, with its Jewish as well as Christian values, ​​is ruled by people, who spread the word, but act contrary to them. In the contrary the “underdogs”, in those times the Hippie movement, is much more connected to these values but powerless and demonized.

In addition, the composer delivered a retrospective of his own work by using all the wide repertoire of styles he was a master of.: from gregorian singing to modern times. The Introit. For example, the moving of the lithurgical entitled in the community, he composed as a typical American marching song.

The Gospel “I Go On” tells about the nature of men, who continues to be themselves despite all earthly adversities.

“In nomine Patris” has a Moorish appeal and is connecting back to the Sephardic songs. The. Meditation No. 1. depicts the disunity of the celebrants in mass.

With the “Gloria tibi. l.st “ the doubts arise in harmony and a belief in beauty: it sounds lively, cheerful, relaxed, a message of hope. It reflects Bernstein's concern to move People to return to and trust in themselves.

A year before the “Mass”- Premiere, a hit from the folk Rock duo Simon & Garfunkel hit the international charts: “El condor pasa” (The condor flies by). The two musicians with Jewish Roots sang an English language version of the original Peruvian song, composed in 1913 by Daniel A. Robles (1871 - 1942) and edited in 1956 by the Argentine Jorge Milchberg. 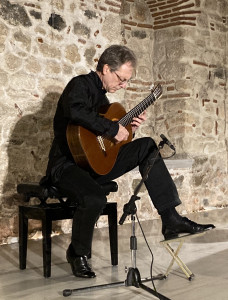 Lucian Plessner was a student of Tadashi Sasaki at the conservatory Cologne, where he also received lessons in Igor Ozim's violin class and the Amadeus Quartet. As a 19-year-old he met the legendary Argentine guitarist and singer Eduardo Fal. He accompanied him at some concerts. After completing his studies, Plessner lived in Cordoba, Andalusia. There he worked out his Spanish concert repertoire with Alicia de Larrocha.

Lucian Plessner caused a sensation in 1989 with his arrangements of Leonard Bernstein's music for concert guitar, which he had been asked for an authorized by the composer himself. (CD .Bernstein onGuitar.). With this program he gave concerts from San Francisco to Moscow, and from Vienna to Israel.