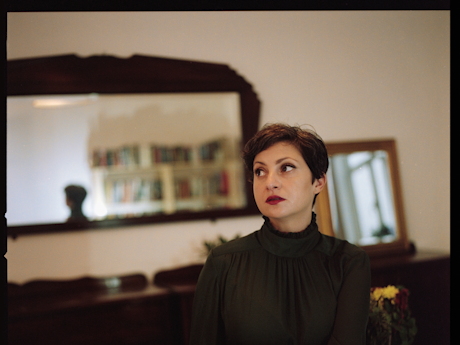 Charlie Cauchi is a researcher, producer, artist and filmmaker. Her current work forms part of the Valletta 2018 Foundation’s European Capital of Culture programme. Entitled Latitude 36, this transmedia project includes the documentary short, From Malta to Motor City, which focuses on  the Maltese diaspora in Michigan, USA. Her recent exhibition at Blitz-Valletta used a mixture of visual art practices to examine just few past and present migration stories.

At the Mahalla Festival Charlie Cauchi is showing the Video Hanina about the Maltese Diaspora in Tunisia:

In Ezzahra, Tunisia, you will still find a Rue Maltese. In a nearby town, a Catholic church built by Maltese immigrants still stands. Throughout the 19th and 20th century, many Maltese chose to make a life for themselves on North Africa shores, working in varied  industries. Ezzahra is still an industrial town, and its similarity to Malta in its signage, colours, coastal aspect and vernacular architecture is palpable. Today, the Maltese migrant worker community is largely gone, but the exchange of labour remains. Maurice Debattista is the Manager of Bortex’s Ezzhara factory, where the Maltese firm produces their Gagliardi suiting line. The factory employs a Tunisian workforce and their skilled labour produces fine Maltese tailoring, an operation captured between glimpses of landscape and setting.